What do the recent RBI notifications on Prepaid Payment Instruments mean for GoSats users?

In a notification addressed to non-bank Prepaid Payment Instrument (PPI) issuers, the Reserve Bank of India has reportedly sent communication that PPIs cannot be loaded with credit lines or preset borrowing limits.

The RBI communication reportedly said: “The PPI-MD (Prepaid Payment Instruments-Master Directions) does not permit loading of PPIs from credit lines. Such practice, if followed, should be stopped immediately. Any non-compliance in this regard may attract penal action under provisions contained in the Payment and Settlement Systems Act, 2007.”

PPIs include prepaid cards and other forms of payments like wallets that facilitate the purchase of goods and services, and other payments against a pre-loaded stored value.

Why is this happening? What would be its impact?
The KYC guidelines are reportedly much less strict than banks for several PPI issuers. It looks like RBI is looking to remove any regulatory arbitrage that PPI issuers may have as compared to banks.

Currently, the RBI as well as its partner banks/NBFCs may not necessarily have complete control and visibility over the funds being used or customer details.

Once implemented, partner banks and NBFCs to these PPI issuers will have to restrict their credit lines, and this does raise questions on the business model and existence of certain fintech players.

What This Means for GoSats and GoSats Card Users
The GoSats Bitcoin Rewards Card is a PPI that lets users earn Bitcoin rewards on their transactions.
However, the above-mentioned RBI directive has no bearing whatsoever on GoSats since the Bitcoin Rewards Card offers no credit facilities.

To put it very simply: The GoSats Bitcoin Rewards Card is a payment instrument – not a credit instrument.

GoSats users can continue using the Bitcoin Rewards Card for their purchases and earn Bitcoin, as usual.

Price vs Fundamentals of Bitcoin 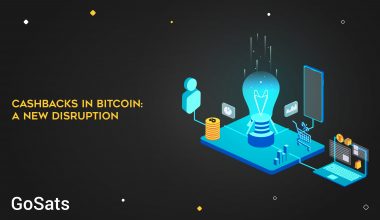 Read More
BBitcoin
The concept of Cashbacks has exploded in India along with the rise of the e-commerce sector which according to…
GGeneral
As booking started for the GoSats Bitcoin Rewards card last weekend, we’ve been receiving a lot of queries…
GGeneral
If you’ve been following the news closely, a common headline in recent times has been how the Indian…
GGeneral
The tax laws that the Government announced during the Last Budget, as well as a recent answer by…
GGeneral
It’s that time of the year again. A time for colours to be thrown around, for get-togethers and…
GGeneral
As the holy month of Ramadan came to a close earlier this week, it’s time for an update…
Tweets by gosatsapp